How the world is (not) handling surplus doses and expiring vaccines

Wealthy countries, including the UK, have secured hundreds of millions of covid vaccines that they no longer need or cannot use. Now they stand accused of wasting lifesaving vaccines, reports Jane Feinmann

In late July 2021, US states were reported to be sitting on around 26 million unused doses of covid vaccines, enough to protect 13.1 million people, including a significant tranche of Pfizer doses due to expire in August.1

“We’re drowning in this stuff. It’s starting to get a bit silly,” said Robert Ator, a retired US colonel who leads on the vaccine distribution drive in Arkansas, speaking to the Stat health news website. Meanwhile, Canada,2 Germany, Israel,3 Lithuania, Poland,4 and Romania have all discarded vaccines that had passed their expiry date.

The UK faces a similar problem. At the end of July reports emerged of 170 000 doses of Moderna vaccine that were at risk of expiry within a fortnight. NHS doctors have also reported thousands of Pfizer and Moderna shots being discarded.5 And new, independent data passed to The BMJ by the life science analytics company Airfinity show that the problem is even more serious.

The UK has bought 467 million doses of covid vaccines due to be delivered in 2021. Like every high income country, the UK hedged its bets by placing orders before the vaccines gained approval, but it now has around seven vaccine doses per capita, says Caroline Casey, lead analyst at Airfinity.

She explains, “That means the UK government will have 219 million surplus doses in 2021, assuming that 80% of all over 16s are vaccinated, with boosters given to high risk groups from the end of September 2021.

“Once the government has given away the 30 million it’s pledged to donate [to other countries], that still leaves a surplus of 189 million doses. By 2022, that surplus figure could reach 421 million doses.” 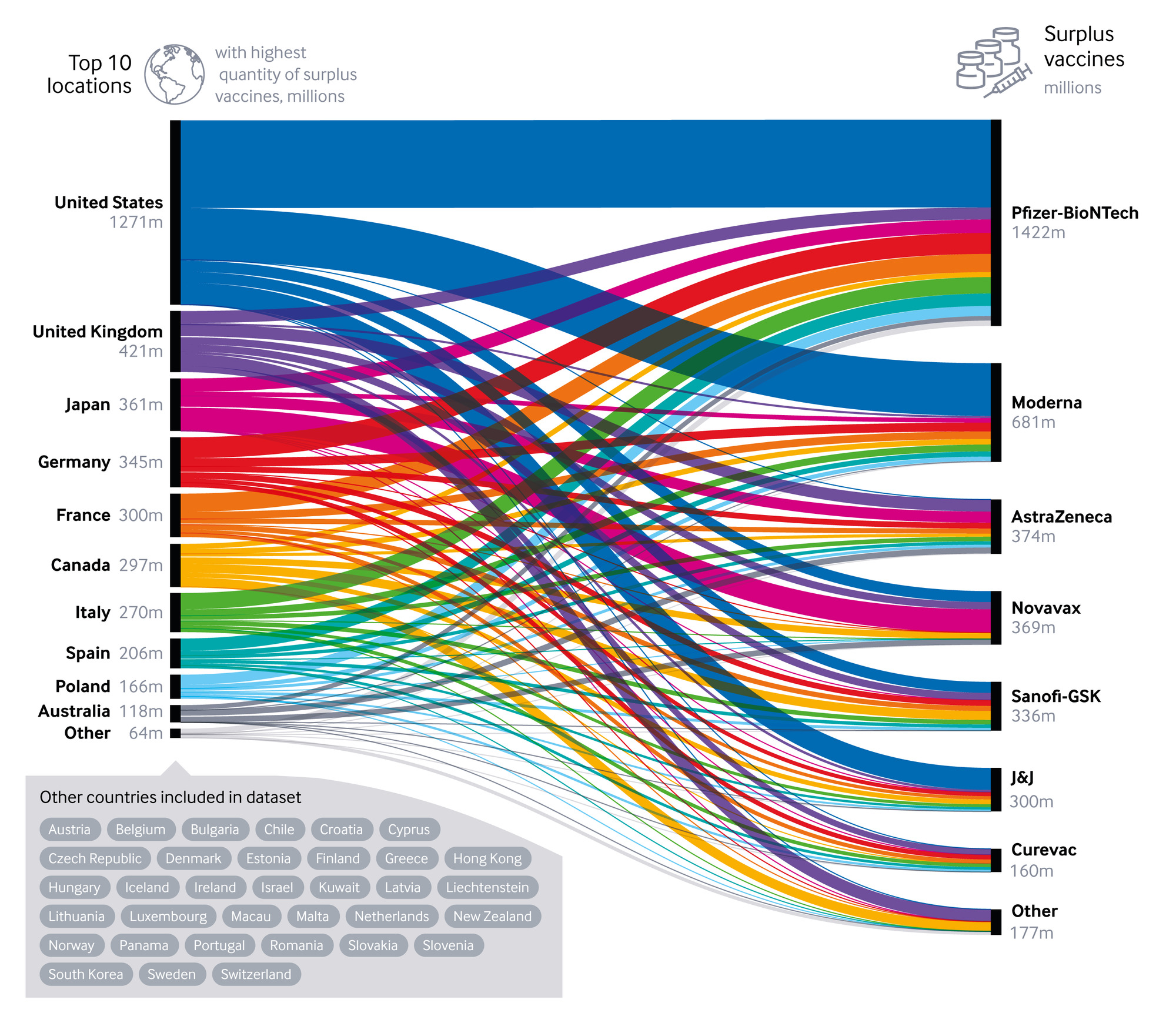 Donating surplus doses is not as easy as it sounds. Vaccine hesitancy, concerns over the AstraZeneca vaccine, and waning domestic demand are occurring in many countries at the same time. And the cautious shelf life given for vaccine doses manufactured from around December 2020 onwards mean that many surplus stocks are now reaching their expiry date.

The Pfizer, Moderna, AstraZeneca, and Janssen (Johnson & Johnson) vaccines were put on the market with emergency use authorisation of up to six months. This compares with a shelf life of two to three years for most vaccines and other medicines. This is an “inevitable consequence of getting the vaccines out of the door as quickly as possible,’” says Gino Martini, chief scientist at the Royal Pharmaceutical Society.

Months later, these “emergency” expiry dates remain in force for all of these vaccines, a spokesperson for the UK’s Medicines and Healthcare Products Regulatory Agency (MHRA) has confirmed to The BMJ.

“For the approved covid-19 vaccines, the initial shelf lives were based on the data available at the time of submission to the MHRA,” they said. “The long term shelf life has not been extended for any of the covid-19 vaccines approved by the MHRA, and it is important to note that a shelf life extension would require supporting evidence from relevant stability studies.”

Vaccine manufacturers are monitoring batches of vaccines with the aim of providing a longer shelf life, probably the usual two years. Martini says, “I can assure you that regulators and manufacturers are in discussion at this moment.”

Yet these discussions will not help with the hundreds of millions of vaccine doses already purchased and distributed that are now reaching their use-by dates.

The problem threatens to undermine donations from wealthy countries to the international Covax initiative for equal covid vaccine distribution, as well as the comparatively high level of vaccine acceptance observed in low and middle income countries.

Donated vaccines close to expiry are viewed with suspicion—“giving leftovers to the needy” is how Ayoade Alakija, co-chair of the Africa Union’s Vaccine Delivery Alliance, described it to the Telegraph6—a view that jars with the World Health Organization’s proposal to transfer expired doses to other countries after it has assessed their efficacy (WHO has asked countries to hold on to expired doses while it explores the viability of this).

Indeed, WHO’s proposal has been ignored by some countries, including those most in need, that have disposed of vaccine doses close to or past their expiry date. In March 2021, for instance, Malawi, with one of the lowest vaccination rates in the world, publicly burnt almost 20 000 doses of the AstraZeneca vaccine marked with an expiry date of 13 April, as these would require second doses from the same batch to be administered after the expiry date.

“We are destroying these stocks publicly in order to stay accountable to Malawians,” the health minister Khumbize Chiponda was reported as saying as she personally placed the red plastic bags of AstraZeneca vials into an incinerator in the capital, Lilongwe.7

South Sudan reportedly plans to discard 59 000 doses for the same reason. And South Africa asked the Serum Institute of India to replace a batch of one million doses that arrived at the start of April with the same expiry date of 13 April.

Such stances are not surprising given that expiry dates are seen as immutable in affluent countries. Caution around new mRNA technology also plays a part. When 899 New Yorkers were given Pfizer second jabs in early June that were later found to have been expired vaccine doses, all involved were called in for a third jab.

“Once you go beyond that expiration date, there’s no guarantee of survival of the mRNA vaccine and the lipid nanoparticle holding it together before it is delivered to the cells of your body,” wrote Bruce Y Lee, professor of health policy and management at the City University of New York, in Forbes magazine.8 However, there is no evidence that mRNA and other vaccine types would not remain effective for longer than their expiry dates.

The MHRA says that no covid vaccine manufacturer has attempted to extend an emergency use authorisation in the UK. “If a marketing authorisation holder wishes to extend the currently approved product shelf life, supportive data must be submitted for assessment and approval by the MHRA,” an agency spokesperson told The BMJ. “Anyone with competence can conduct stability tests on stocks of the product. The responsibility for obtaining and submitting the necessary supportive stability data lies with the marketing authorisation holder.”

That responsibility is time consuming but crucial if we are to fix the huge inequality in vaccine access around the world, says Médecins Sans Frontières (MSF).

“To extend shelf life, the manufacturers have to submit additional real time stability data to regulatory authorities,” says Myriam Henkens, an international medical coordinator at MSF. “Once this is accepted, manufacturers then have to provide correct information on the vaccine vial label [or] box and on the leaflet. We must expect the manufacturers to take their responsibility in extending the shelf life officially.”

Amanda Harvey-Dehaye, MSF’s task force leader for WHO’s Access to Covid Tools (ACT) Accelerator, says, “Given the risk of thousands of doses being destroyed, it’s a shame we have so little visibility over stability tests run by manufacturers—and the subsequent extensions to shelf life. The current expiry dates add real pressure to vaccination campaigns that can already be heavily challenged.”

Some countries have approved expiry date extensions. Health Canada, the country’s federal institution, approved a month’s extension to hundreds of thousands of doses of AstraZeneca vaccine held by Ontario with an original shelf life ending in early June.9 The move was based on “new stability data . . . that revealed no change in the quality of content,” said Ontario’s health minister, Patty Hajdu.

Meanwhile, the Janssen vaccine, originally given a three month shelf life when it was authorised in February 2021, was extended by six weeks in June by the US Food and Drug Administration and by a further six weeks at the end of July.10

But it’s not always that straightforward. Israeli media reported that Pfizer rejected a government request to extend the expiry date on around one million of its vaccines that were due to expire on 30 July, as it “did not have enough information to ensure that the doses would still be safe beyond their current expiration date”11—presumably meaning any addition to the maximum six month shelf life first approved in December 2020, including 31 days at “refrigerated only” temperature.

Israel, with 55% of its population fully vaccinated and demand falling, then tried unsuccessfully to broker a Pfizer vaccine swap deal, first with Palestine and then with the UK, that could have enabled jabs to be given in a timely way. The deal with Palestine fell through when its government decided that the doses were too close to their expiry date. The UK deal failed at an advanced stage “for technical reasons,” even though both sides were reportedly keen.12

Israel finally managed to send the batch to South Korea, where demand was high after a surge in infections, with an agreement that Seoul would return the same number of Pfizer doses later in the year.13

Bureaucracy is also delaying attempts to hand spare vaccines to other countries. In May the University of Arizona wanted to send 100 000 spare vaccine doses in mobile clinics over the border to Mexico but was refused by the US government because of “logistical difficulties.” Stat reported that the US federal government owned these vaccines and that the terms did not permit individual states to redistribute them. At the same time, the Africa Union Vaccine Delivery Alliance is concerned that vaccines are being rushed into countries with next to no preparation.

Donor countries and organisations must support advance planning of donated vaccines to avoid a situation where poorer countries are suddenly overwhelmed with significant numbers of doses, says Casey of Airfinity.

‘There will be a need to boost the infrastructure before any country is able to suddenly quadruple the number of doses it can administer to its population,” she says. “This is particularly true in countries with already weakened health systems and limited capacity.”

This article is made freely available for use in accordance with BMJ’s website terms and conditions for the duration of the covid-19 pandemic or until otherwise determined by BMJ. You may use, download and print the article for any lawful, non-commercial purpose (including text and data mining) provided that all copyright notices and trade marks are retained.

Did SARS-CoV-2 hit Europe earlier than we thought?

The fascinating story behind long COVID