In this interview, we speak to Steffi Oesterreich, PH.D., from the University of Pittsburgh, about how new insights into a gene mutation present in 20-30% of breast cancer recurrences may have a silver lining, leading to novel treatment opportunities.

Please can you introduce yourself, tell us about your background in oncology, and what inspired your latest research?

I am the Shear Family Foundation Chair in Breast Cancer Research and Professor of Pharmacology at the University of Pittsburgh, and Co-Leader of the Cancer Biology Program at UPMC Hillman Cancer Center.  I am also co-directing the Women’s Cancer Research Center, a collaboration between UPMC HCC and Magee Women’s Research Institute.

I received my Ph.D. in Berlin, Germany, in 1992 and have performed translational breast cancer research since that time. I started my independent research career at UTHSC in San Antonio, TX, continued it at  BCM in Houston, TX, and have been at Pittsburgh since 2010.

I am co-leading a research lab with Dr. Adrian Lee, also a Professor at the University of Pittsburgh and the Director of the Institute of Precision Medicine, and we have been studying endocrine resistance in breast cancer for many years.  Over the last few years, a number of groups, including ours, have shown that mutations in the estrogen receptor cause resistance to many forms of endocrine therapy. Given the prevalence of estrogen receptor-positive breast cancer, we are inspired to expand our research efforts in this area.

According to the World Health Organization, 2.3 million women are diagnosed with breast cancer annually, and in the same period, 685,000 deaths are caused by the disease globally. This makes breast cancer the world’s most prevalent cancer. Where do we currently stand in terms of successfully diagnosing and treating breast cancers?

There has been tremendous progress in both the diagnosis and treatment of breast cancer. For the diagnosis, we can now use molecular tests to predict response to different treatments and this has decreased the use of chemotherapy significantly. The time of precision medicine has arrived, although we can definitely do better.  There are great efforts to use liquid biopsies, i.e. blood, to monitor treatment response through the analysis of circulating free tumor DNA and circulating tumor cells.  And as for treatments, there has been an explosion of new approaches, especially in the area of so-called antibody-drug conjugates (ADCs), which have shown tremendous efficacies, especially for Her2-positive breast cancer.

Approximately two-thirds of all breast tumors express estrogen receptor (ER), the receptor for the hormone estrogen. It drives the growth of tumor cells, but fortunately, we have several therapeutic approaches with high efficacy that target ER.  These include aromatase inhibitors which lower estrogen levels and tamoxifen which blocks endogenous estrogen from binding to the receptor and activating it.

Thanks to these therapies, the majority of patients with ER+ breast cancer are cured. Unfortunately, in some cases, the tumors stop responding to endocrine therapies, and the therapy-resistant cancer cells start spreading to other sites in the body. This is then called Stage IV disease, or metastatic breast cancer. We and others have discovered that approximately one-third of these tumors harbor mutations in the DNA of the estrogen receptor gene, called ESR1.

Your initial study explored tumors harboring estrogen receptor gene ESR1 with a mutation at one of several “hotspots” in the genetic code, and further research solidified that hotspot mutations not only drive resistance to hormone therapy but also promote metastasis. Can you explain the findings of these initial studies, as well as what these mutations mean for the cancer prognosis of patients with such tumors?

There are a number of regions in the genetic code of the ESR1 gene that is most frequently mutated, called “hotspot” mutations (Y537S and D538G).  We have shown that breast tumors with such hotspot mutations not only become resistant to endocrine therapies but also show an enhanced ability to metastasize.  Several studies have collectively shown that such tumors are more aggressive, and patients, unfortunately, suffer from worse outcomes in the metastatic setting.

The results of initial research provided a deeper understanding of how mutations contribute to disease progression, and while the findings are bad news for cancer prognosis, the results may also lead us to new treatment opportunities. Why is this the case?

Using laboratory models and clinical specimens which harbor the ESR1 mutations, we were able to identify mechanisms that drive the enhanced metastatic phenotypes that we observed in the tumors.  An example is the activation of the Wnt signaling pathway, which could potentially be blocked with drugs that are in clinical development. While additional studies are required, we believe that our results have uncovered some new opportunities for targeting ER mutant breast tumors.

Your most recent study found that tumors with ESR1 mutations also had high expression of so-called basal features. How was this research conducted and why do basal features make cancers aggressive and difficult to treat?

Using sequencing approaches, we identified the expression of genes in ESR1 mutant tumors that are characteristic of so-called basal tumors, including some keratin genes. Basal tumors are in general more aggressive than ER+ luminal tumors, and this is due to more gene mutations, increased expression of genes that promote tumor growth and metastases, and enhanced plasticity and adaptability that allows the tumors to survive therapy.

This study also offered a silver lining, as mutant tumors were found to have high expression of genes associated with tumor infiltration by macrophages. What does this mean, and how could these findings potentially help treat patients with ESR1 mutant breast cancers?

We observed increased expression of genes that reflect increased infiltration of a unique set of immune cells called macrophages which are white blood cells.  They are best known for their ability to eat pathogens. Macrophages are a family of highly diverse cells, and they range from pro- to anti-tumorigenic. There is increasing evidence that pro-tumorigenic macrophages can be targeted as a form of immunotherapy.

Looking ahead, how do you believe confirmation of immune infiltration in ESR1 mutant tumors could improve breast cancer treatment?

There is hope that drugs inhibiting the activity of pro-tumorigenic macrophages might show efficacy in patients with ER mutant breast tumors. However, additional preclinical studies are necessary, followed by clinical trials to test this hypothesis.

What is next for you and your research?

We believe that one of the most important questions is how to treat patients with ER mutant tumors.  We have identified some pathways that are hyperactivated in these tumors, and it is now critical to decipher whether these pathways provide druggable dependencies, i.e. does the blockade of their activities lead to cell death. We are also intrigued by the potential to develop immunotherapeutic approaches for ER+ tumors, a subtype that is generally considered to be “cold”, in other words, lacks infiltration by immune cells.

We are also studying ER fusion genes, in which the ER gene is broken in half and fused to another gene on another chromosome.  This results again in resistance to endocrine therapy and metastases. We do understand less about ER fusion genes compared to the “hotspot” point mutations.  We believe that their role is currently underappreciated in part due to technical challenges in their detection.

Where can readers find more information?

Our lab website contains additional information about our research: https://leeoesterreich.org/

I am the Shear Family Foundation Chair in Breast Cancer Research and Professor of Pharmacology at the University of Pittsburgh, and Co-Leader of the Cancer Biology Program at UPMC Hillman Cancer Center.  I am also co-directing the Women’s Cancer Research Center, a collaboration between UPMC HCC and Magee Women’s Research Institute.

I received my Ph.D. in Berlin, Germany in 1992, and have performed translational breast cancer research since that time. I started my independent research career at UTHSC in San Antonio, TX, continued it at  BCM in Houston, TX, and have been at Pittsburgh since 2010.

I am a basic scientist who has built a career dedicated to breast cancer research – defining mechanisms of oncogenesis, disease progression, and resistance to therapy. In order to make the greatest progress toward the goal of understanding these mechanisms, I seek broad collaborations and thrive on working with transdisciplinary teams,  including medical oncologists, surgeons, biostatisticians, pathologists, and experts in systems biology. 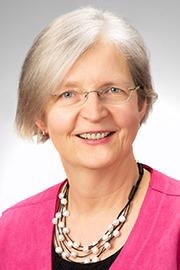 First cholera outbreak since 2017 kills one in S.Sudan

US returning to lead world health

One child has died in mystery liver disease outbreak, WHO says