OPPOSING CHINESE ‘HOSTILITY’:
The bill orders the state secretary to create a plan to regain observer status for Taiwan, saying Taipei is a model contributor to world health

Friday was the deadline for Biden to sign the bill (S.812), which directs “the Secretary of State to develop a strategy to regain observer status for Taiwan in the World Health Organization (WHO), and for other purposes.”

The 75th WHA, the decisionmaking body of the WHO, is scheduled to meet in Geneva, Switzerland, from Sunday next week to May 28. 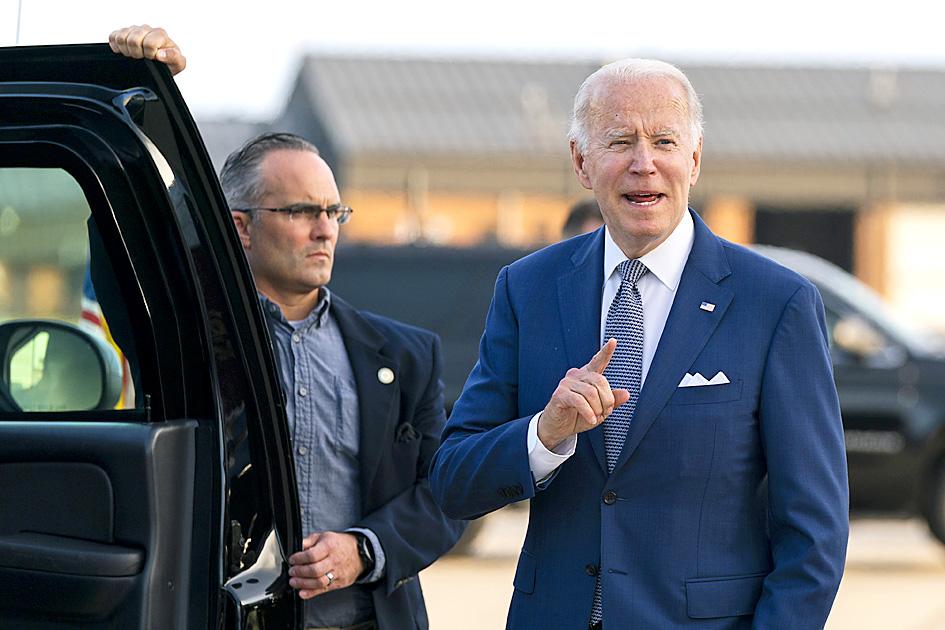 The bill, introduced by US Senator Bob Menendez, chairman of the US Senate Foreign Relations Committee, was passed with “unanimous consent” in the Senate on Aug. 6 last year and was approved 425-0 by the US House of Representatives on April 27.

Menendez wrote on Twitter that he was “thrilled” to see Biden sign the bill into law to support Taiwan in its efforts to regain its observer seat at the WHA.

“In the face of Beijing’s hostility, our efforts powerfully demonstrate the United States’ commitment to Taiwan’s appropriate presence on the world stage,” the US senator said.

The bill says that Taiwan remains a model contributor to world health, having provided financial and technical assistance to respond to numerous global health challenges, as the country has invested more than US$6 billion in international medical and humanitarian aid efforts, leading to positive outcomes in more than 80 countries since 1996.

Since 2017, the WHO has refused to invite Taiwan to attend the assembly due to opposition from China

Menedez and Senator Jim Inhofe, who cochair the Senate Taiwan Caucus, said in a statement that Taiwan’s observer status must be restored, starting with Biden’s signature on the bipartisan legislation.

They introduced the bill in March last year.

“China continues to block Taiwan from obtaining observer status at the World Health Assembly, despite Taiwan being a strong, reliable and dedicated partner to the United States and the international community,” Inhofe said. “Given China’s continued malicious behavior, we cannot allow them to refuse Taiwan a seat at the table any longer.”

The Ministry of Foreign Affairs yesterday said that it was grateful for Biden’s latest show of support, and is determined to work with the US and other like-minded countries to contribute to global health affairs.

The US president since taking office has been taking concrete actions to show US support for Taiwan’s participation in international organizations, the ministry said, adding that signing the bill is further demonstration of the US executive and legislative branches’ support for Taiwan’s observer status at the WHA.

The office also thanks Taiwan’s allies and global democratic partners for their voices of support, he said.

“As expressed in the WHO charter, health is a basic human right and a universal value. Through its experience and medical technology, Taiwan will continue to make contributions to global health and the well-being of people worldwide,” he said.

Taiwan plans to send a delegation to Geneva during the 75th WHA.

The delegation, to be led by Deputy Minister of Health Lee Li-feng (李麗芬), plans to meet representatives from WHO member countries on the sidelines, to hold discussions and gain support for Taiwan’s participation in the WHA.

Comments will be moderated. Keep comments relevant to the article. Remarks containing abusive and obscene language, personal attacks of any kind or promotion will be removed and the user banned. Final decision will be at the discretion of the Taipei Times.

Dr. Fauci Just Said Something Every American Should Hear — Eat This Not That

Monkeypox: Time to worry or one to ignore? – BBC

WHO: COVID-19 falling everywhere, except Americas and Africa