Michigan once again set a new weekly record of confirmed COVID-19 cases with 16,362 reported through Friday and still an additional day to add to the count.

It’s the third consecutive week to break weekly case records, which health officials say indicates a surge of the virus in the state. It surpassed last week’s record of 13,129 confirmed cases and the 10,241 cases two weeks ago. Before the severe uptick this month, the previous weekly high was 9,768 set April 5-11.

Friday’s tally also nears Thursday’s record of 3,675 new cases in a single day. The previous high for daily cases was set less than a week prior, on Saturday when the state added 3,338 cases.

Statewide network connectivity issues delayed Thursday’s data pull past the 10 a.m. deadline. Some cases that would have normally been counted in Friday’s totals were included in Thursday’s count, according to the Michigan Department of Health and Human Services

Michigan’s numbers are even higher with probable cases. The state now has 193,388 probable and confirmed cases and 7,665 confirmed and probable deaths, according to state health department data.

“Local health departments are investigating over 400 outbreaks, and we know there is also general community spread of the virus,” she said. “Cases are rising in every area of the state. Wearing masks and avoiding high-risk activities like large indoor gatherings remains important if we are going to bring this curve down.”

On Thursday, the state health department unveiled orders that limit non-residential indoor gatherings without fixed seating to 50 people — the limit was 500 — and restrict individual table sizes at restaurants to six people.

Michigan restaurants also will have to begin tracking the names and numbers of customers in case of COVID-19 outbreaks starting Monday.

“MDHHS tightened rules for indoor gatherings on Thursday to save lives and contain the virus, which threatens to overwhelm the state’s health care system,” Khaldun said Friday.

In addition, Thursday’s order moves the 17-county Traverse City region back to Phase 4 in the state’s economic reopening plan. Previously, that region was the only one in Phase 5, a status that brought some eased restrictions on masks in schools and gatherings.

Gov. Gretchen Whitmer said Wednesday the COVID-19 spread the state is experiencing is “very concerning” and people should be “smart” in the coming days, which will bring Halloween and a football game between Michigan State University and the University of Michigan.

“Be smart,” Whitmer said during a press briefing Wednesday. “Keep our wits about us. Wear the mask. Don’t host the big event. Sit and watch the game. Have the Zoom call on. Grab the beer. Enjoy it. But stay safe.”

The state ranks 26th in the country for daily new cases, with a new case rate of 25.7 new cases per 100,000 per day, according to national nonprofit COVID Act Now.

The group of technologists, epidemiologists, health experts and public policy leaders moved the state into a COVID risk level Thursday, indicating an “active or imminent outbreak.”

“Michigan is either actively experiencing an outbreak or is at extreme risk,” the modeling site said. “COVID cases are exponentially growing and/or Michigan’s COVID preparedness is significantly below international standards.”

Dr. Preeti Malani, chief health officer and a professor of medicine at the University of Michigan, said early in the pandemic, the state focused heavily on the deaths that were occurring, but there’s a long-term effect going unnoticed even as deaths slow.

“Deaths are not the only bad thing about COVID, people can have mild infections that lead to a prolonged recovery. We don’t fully understand it. We focus on lungs and pneumonia, but there’s a huge piece we don’t understand. If 10% of the 16,000 just this week have prolonged recovery, that’s a big toll on our community.” 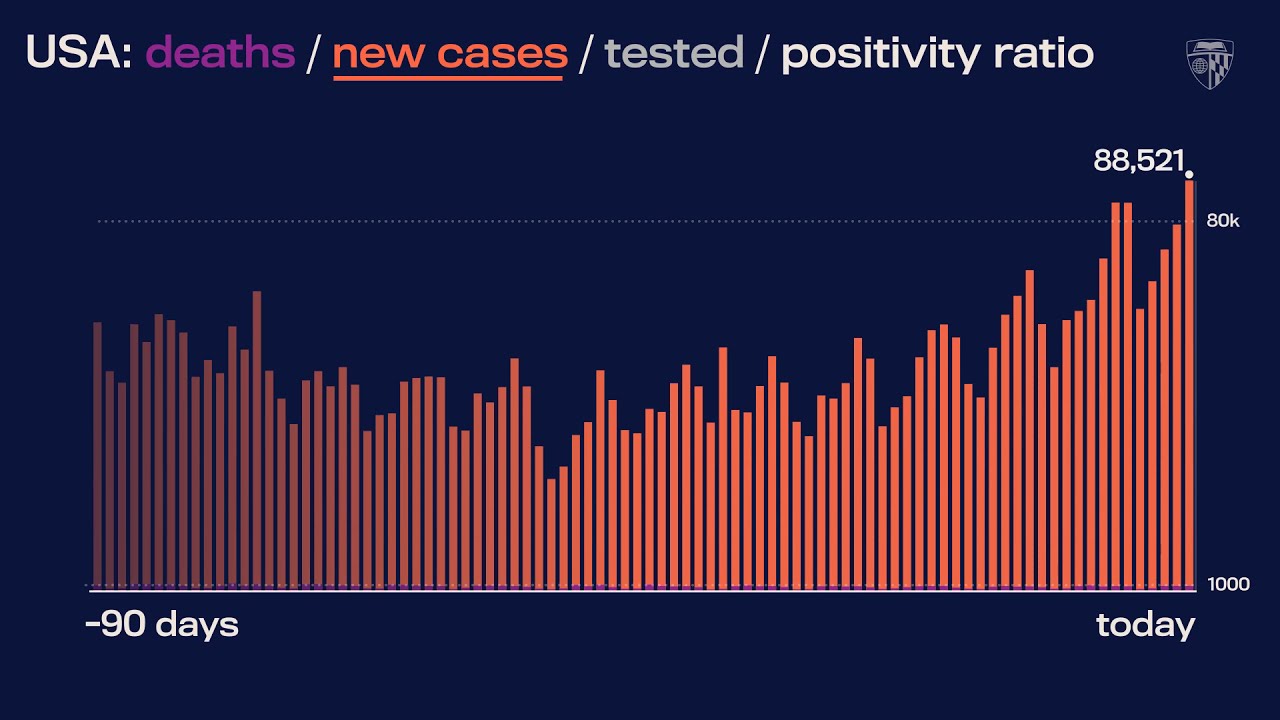 While testing for the virus has increased greatly, Michigan is also seeing upticks in hospitalizations and deaths linked to the virus.

As of Thursday, the state reported 1,545 people are hospitalized with confirmed cases of the virus, which is three times the number a month earlier. Of those hospitalized, 160 people are on ventilators and 382 in intensive care units.

There were 1,357 emergency room visits related to COVID-19 on Thursday across the state.

At Henry Ford, there are 140 COVID-19 patients in its five hospitals, with the most, 46 patients being at Macomb Hospital, officials said. As of Thursday, the hospital had 135 COVID-19 positive tests for the health system, which is seeing a 9% positivity rating from its 1,500 tests each day.

“This is almost a 50% increase compared to where we were two weeks ago,” he said. “We’re also seeing similar trends in asymptomatic outpatient visits jumping to 10% testing positive from 3% just weeks ago. Both of these are telling us that it’s not more testing, but more spread of the virus in our communities.”

Last week, Michigan reported 172 new deaths, the most reported in a week since May 31-June 6, when there were 188 deaths. At the spring height of the pandemic, 966 deaths were reported during the week of April 19-25.

► For subscribers: What Michigan’s hospitals are seeing with surge in COVID-19 cases

Local health departments are investigating 400 outbreaks, compared with 123 from earlier in the month. Of the outbreaks, 144 were newly added on Oct. 22.

More than 62,000 tests were completed in Michigan Thursday, and of the tests, 58,000 returned negative, giving Michigan a 6.58% positivity rating.

Malani said while the number of infections is increasing across the nation, Michigan and the nearby region, including Wisconsin, which has a 29% positivity rate and 5,000 cases Friday, is being hit hard.

“As humans, we want to gather which makes it difficult for all ages. The use of masks is variable too. We’re also seeing it increase in these less densely populated places in the state.”

Long-term health care facilities continue to face consistent hurdles. As of Oct. 21, 9,185 residents have confirmed cases, and 2,222 residents have died. While deaths have slowed over the past two months, there has been an uptick of staff members infected: 5,424 compared with 4,100 in August.

The Michigan health department recently issued an order allowing indoor visitation by appointment at long-term care facilities if a facility has had no new cases within 14 days and if COVID-19 prevalence in a county in which a facility is located falls within permissible boundaries.