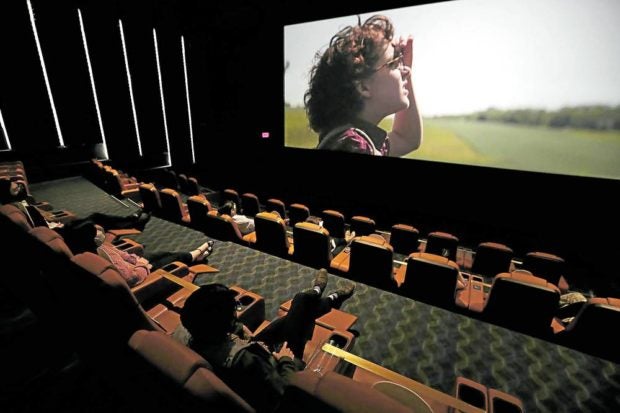 POPCORN TO FOLLOW After being shuttered for months due to the pandemic, one of the movie theaters at Power Plant Mall in Makati City gets its first few viewers on Wednesday. Cinemas in Metro Manila are finally allowed to operate under alert level 2. —RICHARD A. REYES

MANILA, Phiilippines — The country’s positivity rate was finally well within the benchmark of the World Health Organization (WHO) on Wednesday, but the day’s new COVID-19 cases breached the 2,000-level again.

The Department of Health (DOH) on Wednesday reported a 4.3 percent positivity rate. This is the number of individuals who tested positive for the coronavirus in relation to the total tested.

It was below the WHO’s recommended rate of under 5 percent. But this rate should be maintained for 14 days to indicate that COVID-19 is under control.

It was the lowest positivity rate since Jan. 31 this year when it was 4.86 percent, according to DOH data.

It was as high as 30 percent in September, alarming doctors as the Philippines experienced the “most severe’’ surge of COVID-19 infections since the pandemic struck the country in 2020.

On Wednesday, the DOH reported 2,646 new COVID-19 infections, up from the previous day’s 1,409 cases, which was a record-low in nearly nine months.

The latest daily case tally brought the total number of infections in the country to 2,809,311.

Active cases also dipped for the fifth straight day to 29,138. Of those currently infected with the virus, 60.8 percent had mild symptoms. Other cases were moderate (17.4 percent), severe (10.4 percent), asymptomatic (7 percent) and critical (4.4 percent).

Seven laboratories were not able to submit their data on time, according to the DOH.

Guido David of the independent pandemic monitor OCTA Research said the jump in infections reported on Wednesday may be due to a data backlog.

“This is higher than Wednesday last week so if there was no backlog, I would be worried already,” David said in a tweet following the release of the case bulletin.

Former National Task Force Against COVID-19 adviser Dr. Tony Leachon said on Twitter that the government’s next goal should be to increase the vaccination rate to 70 percent.

Based on the Nov. 9 data from the national COVID-19 dashboard, 30.1 million had been fully vaccinated, while 35.7 million had received their first shot. The country is targeting to inoculate 70 percent of the country’s estimated 110 million to achieve herd immunity.

By priority group, only 3.7 percent or 634,206 of the rest of the adult population categorized as B and C groups had been fully vaccinated, the same data showed.

The elderly, among the most vulnerable, have a vaccination rate of a little over half at 59 percent or 4.87 million individuals.

As the country loosened restrictions, a pediatrician advised parents to bring their children to open spaces and areas with good ventilation instead of enclosed spaces in the wake of the lifting of age-based restrictions under alert level 2.

Over the weekend, children were seen visiting public spaces such as malls after more than a year of being in quarantine following the easing of mobility restrictions in Metro Manila until Nov. 21.

Pediatric infectious disease expert Dr. Benjamin Co said that it is the parents’ responsibility and decision to bring their children out. But he said the decision should be made based on what we know about the transmission of the virus.

“If parents want to bring out their kids, they need to plan that trip. Consider other factors especially with the ongoing pandemic… and consider the readiness of their children to behave in public,” Co told the Inquirer.

“If [they] had to choose between open doors and malls, open air destinations will always be safer because of the free flow of air. Malls are also more enclosed and the volume of people moving to and from various points including having to share toilets and toys and other play equipment make managing infection control in these environments more difficult,” Co added.

In Geneva, Switzerland, the WHO’s chief scientist on Tuesday said she was looking forward to the “second generation” of COVID-19 vaccines, which could include nasal sprays and oral versions.

Soumya Swaminathan said such vaccines could have advantages over the current crop as they would be easier to deliver than injections and could even be self-administered.

Swaminathan said there were 129 different candidate vaccines that have gotten as far as clinical trials—being tested on humans—while a further 194 were not yet that advanced in their development and are still being worked on in laboratories.

“This covers the entire range of technologies,” she told a live interaction on WHO social media channels.

“They’re still in development. I’m sure some of them will prove to be very safe and efficacious and others may not,” she said. —WITH A REPORT FROM AFP

Don’t miss out on the latest news and information.

Coronavirus: This Omicron symptom may linger on even after recovery

Only 40% of US. population has gotten boosters: COVID updates