Home » CDC News » If Your Fish Tastes Like This, Throw It Away Immediately, CDC Says
CDC News

If Your Fish Tastes Like This, Throw It Away Immediately, CDC Says


Eating fish as part of a well-rounded diet has a long list of health benefits. Beyond being lean and protein-rich, fish is high in brain-boosting omega-3 fatty acids and teeming with vitamins and minerals. Yet, according to the Centers for Disease Control and Prevention (CDC), there’s one major downside to eating fish—the risk of contracting fish poisoning caused by contamination. In particular, there’s one type of fish poisoning that can lead to serious symptoms and, in rare cases, hospitalization—and the CDC says that the key to avoiding it is recognizing a specific change in taste and texture. Read on to find out when to throw away your fish and which symptoms to look out for if you believe you’ve eaten a contaminated cut.

RELATED: This Is the New No. 1 Cause of Food Poisoning, CDC Study Says.

There are two main types of fish poisoning, says the CDC: ciguatera poisoning and scombroid poisoning. The latter, scombroid poisoning, occurs all over the world and is caused when improperly stored or preserved fish contain excess levels of histamine. For this reason, the condition is also sometimes referred to as “histamine poisoning” or “histamine toxicity.”

“Fish contaminated with histamine may have a peppery, sharp, salty taste,” but will otherwise have a normal appearance, scent, and flavor, the CDC says. This can lead to some confusion, given that many people season their fish with salt and pepper. However, the health authority notes that in addition to the subtle change in taste, you may also notice a “bubbly feel” to the texture, which may help you to distinguish between standard seasoning and a contaminated cut of fish.

RELATED: 7 Foods You Should Never Put in Your Slow Cooker.

According to the American Academy of Allergy, Asthma & Immunology, histamine poisoning occurs when fish that have naturally high levels of the chemical histidine are exposed to an overgrowth of bacteria, which can convert histidine into histamine.

For this reason, histamine contamination most commonly occurs when the fish has been stored at too high a temperature, thereby allowing bacteria to multiply rapidly. “The key to prevention is to make sure that the fish is properly iced or refrigerated at tempera­tures <38°F (<3.3°C) or immediately frozen after being caught,” advises the CDC. “Cooking, smoking, canning, or freezing will not destroy histamine in contami­nated fish,” they further note. 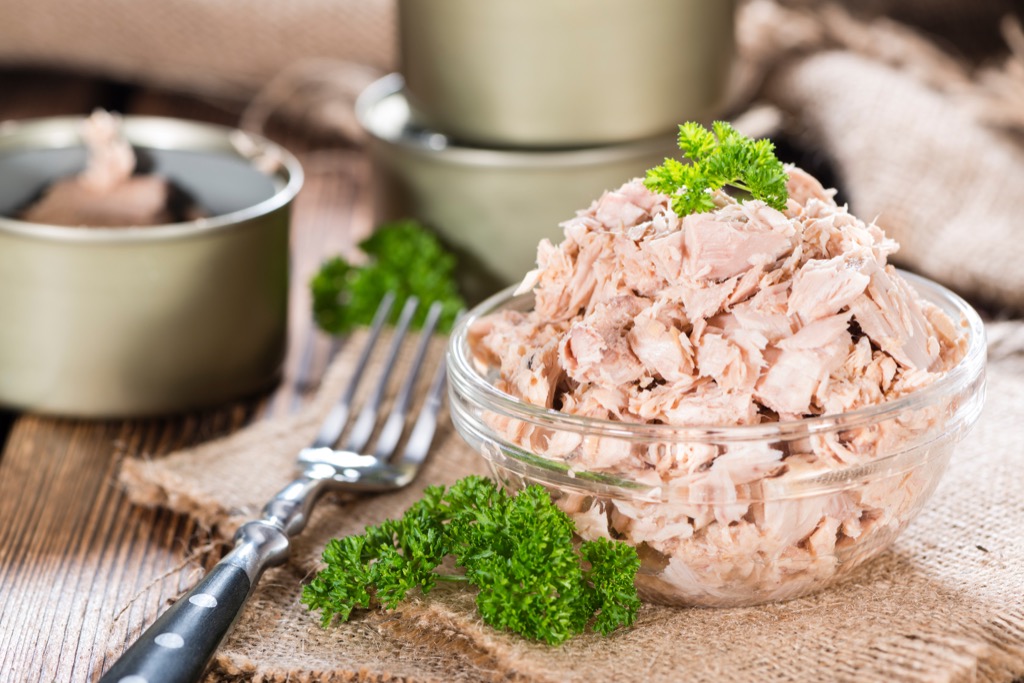 Because certain fish naturally contain more histidine than others, you can slash your chances of contracting scombroid poisoning by avoiding those types of fish—especially if you’re at high risk of a severe reaction. Fish with the highest likelihood of a problem include tuna, mackerel, mahi mahi, sardine, anchovy, herring, bluefish, amberjack, and marlin, says the CDC.

For more food safety news sent directly to your inbox, sign up for our daily newsletter.

Often confused for an acute allergic reaction, the symptoms of scombroid poisoning usually appear between 10 and 60 minutes after consuming a contaminated piece of fish. Symptoms will often improve within 12 hours, but have been known to persist for 48 hours or more in some cases.

The CDC says to look out for redness or flushing of the face and upper body, as well as abdominal cramps, blurred vision, diarrhea, heart palpitations, itching, and a severe headache. Additionally, some patients experience an irregular heartbeat, respiratory difficulties, or a sudden drop in blood pressure. In rare cases, these symptoms may require hospitalization. Always throw away fish that shows signs of contamination or spoilage and contact a medical professional immediately if you think you may be experiencing histamine poisoning.

RELATED: If You’re Over 65, Avoid This One Type of Meat, Experts Say.