For first time in 20 months, Israel welcomes back tourists


Israel on Monday opened its borders for the first time since March 2020 to tourists who are vaccinated against COVID-19 or have recovered from the disease.

The vast majority of tourists have effectively been banned from entering Israel since the start of the coronavirus pandemic. The reopening of borders has been delayed numerous times throughout the year, as COVID infections waxed and waned.

The move is seen as a vital step to somewhat restoring Israel’s tourism industry, which has been devastated by the pandemic and accompanying restrictions.

The Tourism Ministry welcomed Monday’s reopening, saying that “throughout the global corona pandemic, interest in visiting Israel has remained high and Israel’s Ministry of Tourism has worked hard to find creative solutions to facilitate the safe return of tourists.”

The ministry said that in recent months it had put in place a trial program with “several thousand tourists, primarily from the USA and Europe, visiting Israel’s religious, historical, cultural and natural sites within a safe and tourist-friendly environment.”

However, not all tourists will immediately be eligible to visit Israel, and those that do come will face restrictions.

Only tourists from countries that aren’t defined as “red” due to high infection rates will be allowed in, although currently there are no countries labeled as such. 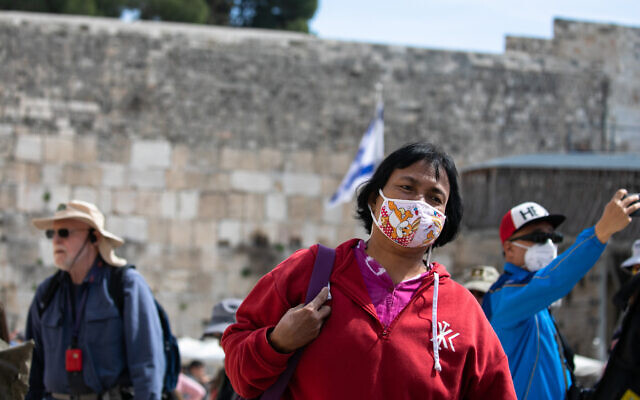 American tourists wearing face masks for fear of the coronavirus tour at the Western Wall in the Old City of Jerusalem on February 27, 2020. (Olivier Fitoussi/Flash90)

Under the new regulations, only tourists who have been vaccinated during the 180 days before they boarded the plane will be allowed to enter Israel. Fourteen days days must elapse between the traveler’s second or third shot and entry to Israel (for Johnson & Johnson, one dose is required).

Starting in the middle of this month, Israel will allow entry to visitors inoculated with Russia’s Sputnik V COVID-19 vaccine, in a policy shift for the country, which until now has only recognized immunizations approved by the United States Food and Drug Administration.

Health Ministry Director-General Nachman Ash confirmed the move to Army Radio on Wednesday and said those who have been vaccinated with Sputnik V will have to undergo a serology test, in addition to the standard PCR tests that all visitors must take before boarding their incoming flight and upon arriving in Israel.

The serology test, which detects antibodies, will verify that those who enter the country really are inoculated against the coronavirus, he said.

Under the previous regulations, tourists began arriving in organized groups in May, though in a very limited capacity. Additionally, first-degree relatives of Israeli citizens or residents were able to apply for permits to travel to the country. 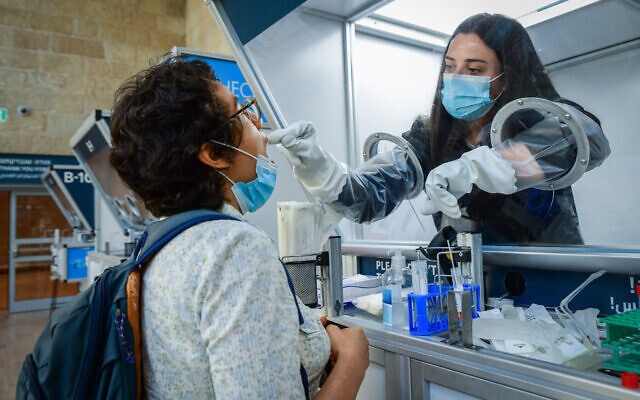 A medical technician tests a passenger for COVID-19 at Ben Gurion Airport on June 30, 2021. (Avshalom Sassoni/Flash90)

While the reopening has been welcomed by tourism officials, it has received a mixed reaction from health officials with some concerned it will expose Israel to new variants.

“We shouldn’t over-test the immunity we’ve built up here,” Prof. Gabi Barbash, a former director-general of the Health Ministry, told The Times of Israel last week.

He didn’t reject the idea of allowing some tourists in, but said he fears that the scale of the reopening — accepting visitors from all countries — is too big.

“I’m not in a position to say [it’s] wrong or right but I’m worried,” he said. “The concern is that you are going to import patients who are apparently immune, but not actually immune.”

Barbash is particularly concerned about Russia, where daily COVID deaths have just hit a new high, especially as he doubts the reliability of the Russian Sputnik V vaccine. Israel has decided to recognize the vaccine from November 15, despite it not having the stamp of approval of the World Health Organization, in an apparent diplomatic gesture to Russia.

In contrast to Barbash, Prof. Eyal Leshem, an infectious disease specialist at Sheba Medical Center, is not particularly worried.

“The airport is not a weak spot today, and hasn’t been a weak spot since we reached high vaccine coverage,” he told The Times of Israel.

Leshem said the coronavirus is transmitted at Israel’s malls, schools, restaurants, concerts and elsewhere. Incoming flights are one of many virus vectors, but unless the percentage of arrivals who are infected and go undetected gets high, it won’t significantly affect virus rates, he believes. 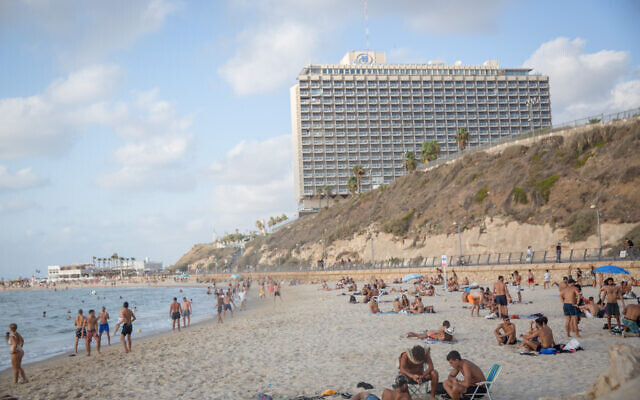 “Most countries have been much more permissive than Israel. There’s no need to keep on hitting the travel industry. We can accept the risk based on the assumption that there is still some community transmission in Israel, and arrivals from abroad will just add to this slightly.”

Leshem said that prior to widespread vaccination, there was a logic to keeping tourists out — as a single COVID-positive foreigner was liable to infect many others. But the risk is much lower now that inoculation has reduced transmission rates.

Israel appears to be at the tail end of its fourth coronavirus wave, as new infections and serious cases have ticked down over the past few weeks.

Just 0.64 percent of those tested on Sunday came back positive, the lowest rate since the start of July.

There were 225 new diagnoses of the coronavirus on Sunday, taking the total caseload since the start of the pandemic to 1,327,458.

There were no new deaths reported on Sunday and the toll remained at 8,100.


You’re serious. We appreciate that!


We’re really pleased that you’ve read X Times of Israel articles in the past month.

That’s why we come to work every day – to provide discerning readers like you with must-read coverage of Israel and the Jewish world.

So now we have a request. Unlike other news outlets, we haven’t put up a paywall. But as the journalism we do is costly, we invite readers for whom The Times of Israel has become important to help support our work by joining The Times of Israel Community.

For as little as $6 a month you can help support our quality journalism while enjoying The Times of Israel AD-FREE, as well as accessing exclusive content available only to Times of Israel Community members.

Already a member? Sign in to stop seeing this