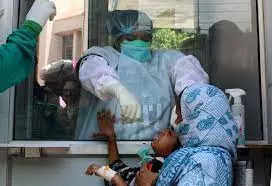 New Delhi: An expert panel, set up by an institute under the Ministry of Home Affairs (MHA), has predicted a third wave of COVID-19 hitting the country anytime between September and October and suggested significantly ramping up vaccination pace.

The committee of experts, constituted by the National Institute of Disaster Management (NIDM), also said that children will have a similar risk as adults since paediatric facilities, doctors and equipment like ventilators, ambulances, etc. are nowhere close to what may be required in case a large number of children become infected.

The report, which has been submitted to the Prime Minister’s Office (PMO), observed that only around 7.6 percent (10.4 cr) people are fully vaccinated in India and if the current vaccination rate is not increased, India can witness six lakh cases per day in the next wave. “Leading experts have repeatedly warned of an imminent third COVID-19 wave in India. Epidemiologists predict a series of surges till we achieve herd immunity through infection or vaccination and the disease becomes endemic,” the report said.

The NIDM report quoted the prediction of experts from IIT Kanpur which suggested three likely scenarios for the third wave based on the level of unlocking.

In scenario three, the experts predicted that the third wave could peak in late October with two lakh positive cases per day. According to the report, earlier, it was proposed that if 67 percent of the population became immune (a few by infection and rest through vaccination), herd immunity could be achieved.

But this has now been complicated by the new and more virulent mutated variants of SARS Cov-2 that have the ability to escape immunity from earlier infections and in some cases even the prevalent vaccines, it said.

This has pushed the target immune population for achieving herd immunity to 80-90 percent. Hence, our health system and vaccines are caught in a race against the virus and are trying to catch up with risks that are evolving every day creating uncertainty all over the world, it said.

The NIDM is now taking a clue from several warnings indicating an imminent third wave, trying to understand them and prepare for the third wave. With this backdrop, it engaged with multiple stakeholders from diverse backgrounds in an attempt to formulate consolidated recommendations for actions that can prevent or mitigate an impending surge.

The report said there isn’t sufficient data to back widespread fears that children will be hit more severely in the anticipated third wave of the pandemic. However, as the virus continues to evolve, this is going to be a major challenge for children as there is no approved vaccine for children in India yet (first week of August).

Children with COVID-19 infection have largely been seen to be asymptomatic or develop mild symptoms. But this becomes worrisome in case children have any comorbidity or other special needs.

According to the Ministry of Health and Family Welfare, out of all the children hospitalised due to COVID, 60-70 percent had comorbidities or low immunity.

Children have also been seen to develop MIS-C (Multi-system Inflammatory Syndrome) which is a rare but extremely serious condition developed post-COVID recovery, it said.

According to a parliamentary standing committee report in 2015, there is an 82 percent shortage of paediatricians in India’s primary health centres and up to 62.8 percent of positions for paediatricians in community health centres were vacant. The working group committee experts suggested a holistic home care model, immediate increase in paediatric medical capacities and prioritising mental health issues among children, the report said.

Coronavirus: Half of all Americans now fully vaccinated - as it happened

CDC chief on FDA’s Pfizer approval: ‘This is a very powerful signal of safety’

What is the R.1 variant? Here’s what you need to know about the mutated COVID strain